Forum rules
Please quote the Greek text you are discussing directly in your post if it is reasonably short - do not ask people to look it up. This is not a beginner's forum, competence in Greek is assumed.
Post Reply
25 posts

As I've said, I haven't studied it. I only know what I heard orally from Klaus. I believe there's also a skeptical discussion of it on the Evangelical Textual Criticism blog.
0 x

Alan Bunning wrote: ↑
May 17th, 2017, 8:18 am
I did not mean to imply that everything they do is “bogus scholarship” nor do I think I said that, but I do see the insertion of this variant as an example of “bogus scholarship” <or insert alternative appropriate respectful word of disagreement>, and that is based on the evidence which I think speaks for itself. There is no ad-hominem attack here, but a strong criticism of their work in this instance. Attacking work != attacking people.

Well, you should choose your words more carefully then. "Bogus" means more than merely being wrong, but deceptive, and that is an attack on the character of the scholars.
0 x
Stephen C. Carlson, Ph.D.
Melbourne, Australia
Top

Yes, I will have to choose my words more carefully, for I was not aware of that connotation. Perhaps a term like “illogical” or “odd” would have been more suitable.
0 x
Top

Alan Bunning wrote: ↑
May 17th, 2017, 7:46 pm
Yes, I will have to choose my words more carefully, for I was not aware of that connotation. Perhaps a term like “illogical” or “odd” would have been more suitable.

Scholarship "unsubstantiated by evidence from the Greek" might better cover it.

I think bogus is a lot milder than it has been interpreted in this thread when it is used in conversational style. Putting Alan's words together with different bedfellows changes their connotation. "Alan claimed the scholarship was bogus" is strong and formal. "Alan is going on (whinging / having his gripe) about bogus scholarship again" mean about the same as "dodgy" (it would be a good idea to avoid it) as in "The car's dodgy, take the bus".

Does anyone know where I can find the German Bible Society's reasoning for including οὐχ in 2 Peter 3:10? Alan provided one link to a discussion of this question, are there other links worth reading?
0 x
ἐξίσταντο δὲ πάντες καὶ διηποροῦντο, ἄλλος πρὸς ἄλλον λέγοντες, τί θέλει τοῦτο εἶναι;
http://jonathanrobie.biblicalhumanities.org/
Top

As far as categorising the type of emmendation it is, we could consider the introduction of

This page gives with a diagram of the readings they were trying to account for:

Index of Variants Discussed in Relation to the CBGM 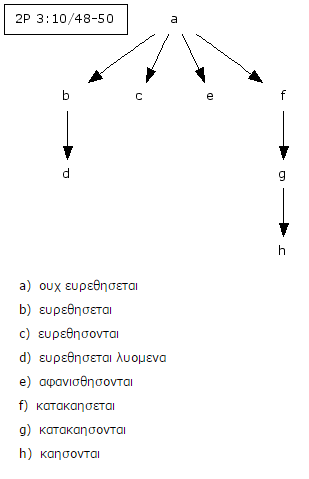 I found this helpful for understanding the basic CBGM approach:

The CBGM Applied to Variants from Acts

I should have mentioned that I asked this question on the New Testament Textual Criticism forum on Facebook, and members there supplied the links in the previous post. You can find the discussion here:

Here is one more that was mentioned there:

David Palmer quotes Gerd Mink as follows, saying he was given this quote by Jan Trans:


Gerd Mink (by way of Jan Krans) in “Problems of a Highly Contaminated Tradition: the New Testament. Stemmata of Variants as a Source of a Genealogy for Witnesses,” in Studies in Stemmatology II (ed. Pieter van Reenen and August A. den Hollander; Amsterdam: Benjamins, 2004), pp. 13-85, p. 27:

“… the ECM records the witnesses of erroneous readings as witnesses for the variants which they represent, albeit defectively. There is even an example where the best witnesses omit a negation (1 Peter 3:10/48-50). Although the preceding passage speaks of the passing away of the heavens, and the dissolution of the elements, and the following verses presuppose the dissolution of heaven and earth (for a new heaven and a new earth are waited for), quite superior witnesses here have the reading ‘the earth and all the works that are therein will be found (εὑρθήσονται [sic; εὑρεθήσεται])’, when logic demands ‘will not be found (οὐχ εὑρεθήσονται [sic])’. The meaning, as a result, is extremely problematic; to my mind the reading does not make sense and must therefore be erroneous. Unquestionably, the hyparchetype of all these witnesses did not have the negation. Now, there are two variants (ἀφανισθήσονται ‘they will disappear’, and κατακαήσεται ‘they will be burned up’), which presuppose and express more graphically a text containing the negation: οὐχ εὑρεθήσονται [sic] ‘they will not be found’. Although it is not preserved in any Greek manuscript, it is probable that the initial text had the negation. Even if these variants which indirectly confirm the negation did not exist, the assumption should still be that the initial text contained the negation required by the sense of the text, even though the negation is not in the graphemic representation of the archetype. To my mind, this is an almost unavoidable conjecture.”

A while back I was looking for a retroversion of the Gospel of Thomas. Turns out that retroverting from Sahidic to koine greek isn’t particularly straightforward and Gsp Thomas isn’t straightforward Sahidic. J.N.D. Kelly on 2nd Peter 3:10 says that the Sahidic version implies οὐχ εὑρεθήσεται. This implies that Kelly actually looked at the Sahidic not just the apparatus. Not a bad plan.


The exact form of negation found in sahidic 2Peter 3:10[1] which looks like it represents οὐχ εὑρεθήσεται I did not find anyplace else where εὑρίσκω is negated with οὐχ and/or μη in NA27. This isn’t intended to imply or prove that the back translation οὐχ εὑρεθήσεται isn’t valid. It is just a word of caution about using the textual apparatus with versions in languages that have a surface structure very different from Greek or Hebrew. Also, the verb ϩⲉ negated by ⲁⲛ that translates εὑρίσκω in our passage appears to have a much wider semantic domain than εὑρίσκω which might introduce some uncertainty about retorversion. I don't pretent to read Coptic in any dialect.

The exact form of negation found in [S]ahidic 2Peter 3:10[1] which looks like it represents οὐχ εὑρεθήσεται I did not find anyplace else where εὑρίσκω is negated with οὐχ and/or μη in NA27. This isn’t intended to imply or prove that the back translation οὐχ εὑρεθήσεται isn’t valid. It is just a word of caution about using the textual apparatus with versions in languages that have a surface structure very different from Greek or Hebrew. Also, the verb ϩⲉ negated by ⲁⲛ that translates εὑρίσκω in our passage appears to have a much wider semantic domain than εὑρίσκω which might introduce some uncertainty about retorversion. I don't pretent to read Coptic in any dialect.

Let me read for you. I don't need to pretend.

[ϥ /f/ "him", "it" is masculine agreeing with ⲡⲕⲁϩ /epkah/ "the earth" - ⲡ being the masculine singular article), is with a third person plural (ⲥⲉ) pseudo-subject and then an object of the subject (ⲉⲣⲟϥ) of the passive verb.]

That structure is often used in Coptic. The position of the negative particle (ⲁⲛ) at the end of the phrase is standard, and the negation only extends to that particular phrase.

The greater range of meaning in ϩⲉ that you mention could be that it includes find by chance, not only by looking, perhaps. The notably wider meaning in the Coptic compared to the Greek is ϩⲱⲃ (here used in the plural ϩⲃⲏⲩⲉ). ϩⲱⲃ covers meanings ranging from "thing", to "matter" to "work".

Apart from the translation about "burning" being wrong there in Coptic Scriptorium, the parsing of ⲉⲧⲉⲛϩⲏⲧϥ /ete-enhētf/ is wrong too. It is represented as a verb (v). Actually, it is a relative phrase. To break it up, ⲉⲧⲉ is a relative marker "which", and ⲛϩⲏⲧ= is suffix pronoun form of the preposition ϩⲛ /hen/ "in" (Crum pg 683), and ϥ /f/ is the 3rd sing masc pronoun "he", "him", "it".

[If you see hieroglyphs in documentaries and such like, the horizontal snake of the width one character with the horns, is the Egyptian horned viper. That character is usually the third person singular pronoun "he", "it". The hieratic form of that hieroglyph formed the basis of the Coptic letter ϥ (fai)].
0 x
Γελᾷ δ' ὁ μωρός, κἄν τι μὴ γέλοιον ᾖ
(Menander, Γνῶμαι μονόστιχοι 108)
Top
Post Reply
25 posts