Other Greek writings of the New Testament era, including papyri and inscriptions
Forum rules
Please quote the Greek text you are discussing directly in your post if it is reasonably short - do not ask people to look it up. This is not a beginner's forum, competence in Greek is assumed.
Post Reply
5 posts • Page 1 of 1

Cited as an example in BDAG ἐκ

Presumably that means a decoration for the neck made up of multiple necklaces consisting of rocks. Perhaps something like either of these images: 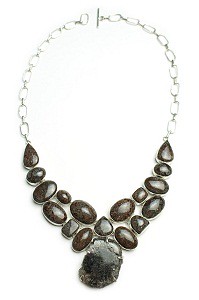 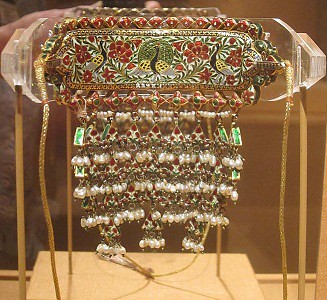 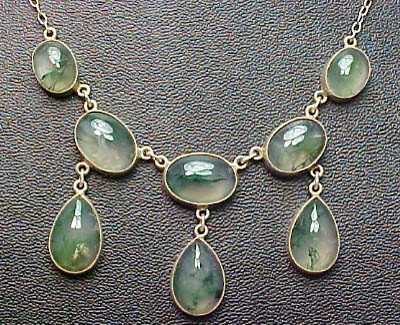 That being the case, how does the syntax work here?

Specifically, the two issues I have are (1) with the text as it is preserved, that the article is not repeated, and (2) with the restoration, that ἀφαιρεῖν is constructed with accusative and genitive, rather than accusative and dative.

According to LSJ, the genitive is sometimes used, though not as often as the dative:

I don't see the lack of the article as a problem at all. Couldn't καθορμίων λιθίνων just mean something like "necklace stones," i.e., the jewels which make up the necklace without it necessarily being something elaborate? Just a suggestion, not really sure.
0 x
N.E. Barry Hofstetter
Instructor of Latin
Jack M. Barrack Hebrew Academy
καὶ σὺ τὸ σὸν ποιήσεις κἀγὼ τὸ ἐμόν. ἆρον τὸ σὸν καὶ ὕπαγε.
Top

Barry Hofstetter wrote:Couldn't καθορμίων just mean something like "necklace stones," i.e., the jewels which make up the necklace without it necessarily being something elaborate? Just a suggestion, not really sure.

Nor am I, but here is my reasoning...

Taking the iota as an adjective, it could, but then, we'd expect it to be followed by a noun like; τό ... περιτραχηλίδιον (κατειργασμένον) ἐκ καθορμίων λίθων. As a diminutive, a noun, it could be followed by an adjective λιθίνων. λίθινος describes the material from which the καθόρμια are made.


Barry Hofstetter wrote:According to LSJ, the genitive is sometimes used, though not as often as the dative:

The story is that the one bringing the complaint to the king was taking a bath when the woman walked in, slapped here anywhere without regard for decorum, and then took her necklace. My thinking was dative of (dis)advantage, which might not mean from off er person. Actually, I think the fineness of distinction is beyond my level of Greek, so it's a good time to ask.
0 x
Γελᾷ δ' ὁ μωρός, κἄν τι μὴ γέλοιον ᾖ
(Menander, Γνῶμαι μονόστιχοι 108)
Top

My other point of difficulty is here:

While I understand it generally, the other difficulty I have in understanding clearly is in these two phrases.

Did the woman who entered the room try to talk her out of the bath-tub, did she enter the tub and try to push the writer of this petition out? I'm assuming that it is not talking about dragging.

Also, is the the ἐμοῦ ... οὐκ ἐκχωρούσης referring to not giving into the demands of the other, or to not vacating the tub. Of course, essentially, in either case the result is the same in the end, but I'd like to know which one is expressed in the Greek? After all, we are working towards understanding the Greek, rather than just getting a passable translation.
0 x
Γελᾷ δ' ὁ μωρός, κἄν τι μὴ γέλοιον ᾖ
(Menander, Γνῶμαι μονόστιχοι 108)
Top

Well, if I write "My wife came in and kicked me out of the bathroom..." What type of action does that actually describe? While ἐκβάλλω does not have the slightly metaphorical force of "kick" in the English context, it could cover any one of several type of actions the result of which would be a move from one place to another motivated by an external force or action. I think you are trying to overread this -- the precise picture of the action is not the point. And in light of ἐμοῦ δὲ οὐκ ἐκχωρούσης does this mean ἐκβάλλει should be conative?
0 x
N.E. Barry Hofstetter
Instructor of Latin
Jack M. Barrack Hebrew Academy
καὶ σὺ τὸ σὸν ποιήσεις κἀγὼ τὸ ἐμόν. ἆρον τὸ σὸν καὶ ὕπαγε.
Top
Post Reply
5 posts • Page 1 of 1